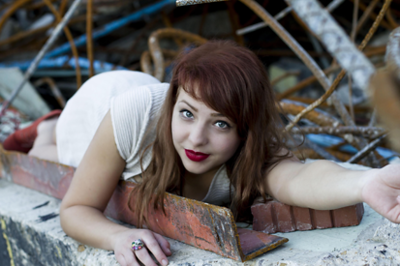 Watch This: "When I Wake Up" by Kindora

Chattanooga "rogue R&B" musician Kindora creates music that is practically impossible to categorize. Her songs blend overt shades of measured R&B rhythms with a heady and detailed electronic approach, which results in a digitalized amalgamation of a handful of different genres. Her music easily slides between fractured pop tones, gossamer vocal melodies and a revisionist view of early '90s hip-hop—specifically the smooth beats and languid rhythms that modern artists like Purity Ring and CHVRCHES have successfully translated on recent albums.

But that's really only a cursory glance at her music. Within all the glossy pop-influenced melodies and works in progress that she's uploaded to her Soundcloud page, Kindora manages to find an uneasiness and hesitancy beneath her music's iridescent façade. There's a depth and a labyrinthine sense of composition that keep the songs from ever feeling like half-finished, stream-of-conscious experiments—even when the songs are labeled as "in progress." And with no proper releases to her name, these songs are the only way in which fans can become immersed in her enigmatic pop landscapes.

For the video to recent song "When I Wake Up," Kindora paired with director Stratton Tingle and filmed on location at The LOSTNEST art space in downtown Chattanooga. As she winds her way through a series of intricate rhythms, the visuals find their own way through repeated transitions, complete with splashes of harsh and vibrant colors and a purposefully splintered graphic aesthetic. It does work to the song's advantage, as it provides a complimentary companion to the music and its own outgoing personality.

Produced and mastered by Rock Floyd, the track meshes pitched vocal loops, a stark percussive bounce and Kindora's own expressive voice into something that sounds as though CHVRCHES were covering a song by Common. There's a hip-hop heart underneath the synths and a determination behind her words that propel the song forward—drawing listeners along in a haze of pop beats and gorgeous melodies. The song gives those not familiar with her particular brand of fizzing rhythmic clatter a chance to acclimate themselves to her unique twist on these sounds and genres.

And after listening to her music for quite some time, there's still no right way to describe it, but maybe that's the best compliment that can be paid to Kindora. Her music may give hints and glimpses of the inspirations that led to its creation, but she never relies too heavily on other artists to support her own musical habits. Call it what you will and describe it however you want, but there's no doubt that Kindora and her music will soon find themselves gracing stages across the region—and eventually all over the country.

The determination to succeed sparks a drive that no obstacle can decelerate or send off course. This is proven in the progressing career of local hip-hop artiste, Vmax who despite the struggles and challenges he has faced continues to steadily move forward as he works towards achieving his goal of success on the international arena. The latest development in Vmax’s mission is the global release of a single titled, “Love This Life” that is available on Itunes.

This song is a duet featuring Vmax alongside Kindora Camp who is a rising young singer from Tennessee, United States. Kindora is a former winner of the Exposure Open Mike series created and produced by award-winning hip-hop artiste T I and Vmax hooked up with her via T I’s fan page on Facebook. Vmax licensed a beat from DJ/producer, Allrounda and invited Camp to record alongside him. The track is receiving very positive reviews out in the US.